I have to admit I was excited when Chloe announced she was teaming up with Papa Baiden to promote his ‘Tomorrow Today’ project and draw attention to the issue of homelessness in the UK. I love participating in #VizForSocialGood and with this one focusing on issues in the UK, it was particularly special for me.

I strongly believe homelessness is a problem which needs to be addressed at source in the UK. Rather than simply providing food and shelter for the homeless, what are we doing as a country to prevent the issues which cause people to become homeless in the first place? Quite frankly I believe homelessness is frequently misunderstood too. It’s very easy for us to assume that people become homeless out of choice or as a result of their own actions. However, this is rarely the case. In fact, the number one cause of homelessness in the UK is end of tenancy evictions from private landlords. This is a situation that any private tenant could find themselves in; Papa even experienced this himself. Often this affects people that are in employment and lead stable, family lives. These are rarely people living on the poverty line. I mean, to rent privately in London costs a small fortune and is not a ‘luxury’ that someone unemployed or surviving on benefits alone would be able to afford (research shows rents as a proportion of household incomes in London are 50% or more and 70%+ in some areas). Increasingly people are being pushed out of the private rented sector and are finding themselves house sharing, then either the social rented sector, or soft homelessness (sofa surfing), then eventually rough sleeping. Private landlords can issue eviction notices for any reason and such notices give tenants just 2-months to find alternative accommodation. This may sound like a lot but once you take into account searching for a suitable property, going through the application process (often involving extensive references and credit checks) and organising the move itself, it doesn’t leave tenants with much time to spare. That’s assuming you meet the requires to private rent at all. I know friends that have faced homelessness in similar circumstances and it’s not an experience I would wish upon anybody.

Papakow Baiden is a social entrepreneur, activist, author, public speaker and Corporate Social Responsibility (CSR) consultant. Papa previously worked for Nando’s for seven years, making his way from part-time cashier to the Sustainability Team based at the Head Office. Whilst working at Nando’s, Papa recognised there was an opportunity for excess food from the restaurants to be donated to those in need. However, he came to discover there were few programs in place that would facilitate such an initiative, especially one on a national level. Papa helped to connect Nando’s with a charity in West London that would accept food donations from the restaurants and it was this interaction, along with his personal experiences that sparked Papa’s interest in homelessness. In 2017, Papa published a book titled “In Our Hands” which seeks to challenge the way we see the homeless. He also holds lectures, seminars and workshops on the topics of CSR and hosts a podcast.

‘Tomorrow Today” is a social enterprise which plans to launch with the sole purpose of delivering the “In Our Hands” project which is detailed in the book. The project can be broken down into 4 main work streams: Relief Work, Public Engagement, Collaboration, and Policy Change.

It’s worth noting that the official rough sleeping counts and estimates are single night snapshots of the number of people sleeping rough in local authority areas. Local authorities decide whether to carry out a count or an estimate. They are encouraged to gain intelligence for street counts and estimates from local agencies such as outreach workers, the police, the voluntary sector and faith groups who have contact with rough sleepers on the street.

In contrast, the CHAIN reports present information about people seen rough sleeping by outreach teams in London only. Information in the report is derived from the Combined Homelessness and Information Network (CHAIN), a multi-agency database recording information about rough sleepers and the wider street population in London. CHAIN, which is commissioned and funded by the Greater London Authority (GLA) and managed by St Mungo’s, represents the UK’s most detailed and comprehensive source of information about rough sleeping. In these reports, people are counted as having been seen rough sleeping if they have been encountered by a commissioned outreach worker bedded down on the street, or in other open spaces or locations not designed for habitation, such as doorways, stairwells, parks or derelict buildings. The report does not include people from “hidden homeless” groups such as those “sofa surfing” or living in squats, unless they have also been seen bedded down in one of the settings outlined above.

Since the goal of this data viz project was to educate I wanted to keep my viz concise and focus on the facts. I endeavored to start with the WHERE (where in the country is homelessness a problem), follow with the WHY (why do people become homeless) and conclude with the HOW (how can you help to support the cause).

Once I saw the official rough sleeper statistics were listed by local authority area I knew I wanted to attempt a map similar to those made famous by Rob Radburn. Rob frequently produces visualisations in Tableau which feature maps that display England as a square grid with the North West region in the top left-hand quadrant and London in the bottom right-hand quadrant. I’ve included an example below designed by Rob which visualises how land is used in England (click on the image to interact with the full version in Tableau Public):

I reached out to Rob to request a tutorial or run-through of how I could produce something similar myself using the rough sleeper data. However, Rob, being the superstar that he is, kindly offered to build a map template for me to use. Rob even sent this to me within hours of asking him. Thank you Rob!

Now I had the map template all I needed to do was add colours to highlight areas where rough sleeping was more prevalent. This was easier said than done. I decided early on that I wanted to stick to minimal colours in my viz, namely greys, black and yellow (to align with the Papa Baiden branding). However, trying to add colours to the map shading simply did not work and created ugly results. After much consideration I decided to stick to grey only for the map, using a lighter shade to highlight where rough sleeping was more of a concern and reserving yellow for the region labels instead. I’m quite happy with how this turned out:

Given that both the map and the bar chart focused on 2016 only I also included a line chart to show the trend in rough sleepers since 2010. Initially I built this to show the top 10 local authorities only, similar to the below: 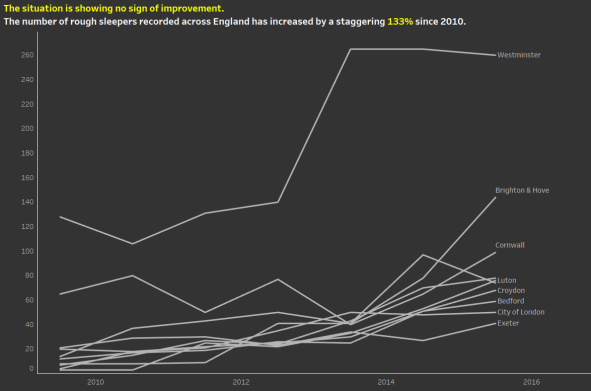 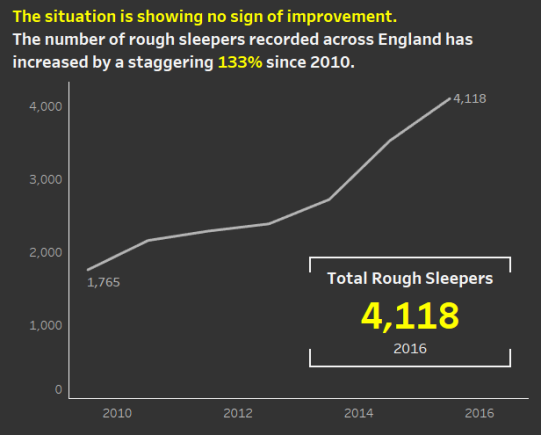 Definitions of the categories are as follows:

I found the CHAIN report of particular interest. Not only did it go into more detail than the official rough sleeper statistics but the numbers included in the report were a lot more believable and a stark contrast to the official numbers.

I thought it was important to include a breakdown of rough sleepers according to the flow, stock and returner model too as the results of this were also interesting.

The stats suggest that approximately 56% of rough sleepers recorded by CHAIN fell into the ‘flow’ category, meaning they were new to the streets and had not been recorded in previous years. Does this support the argument that the number of rough sleepers is on the increase I wonder? 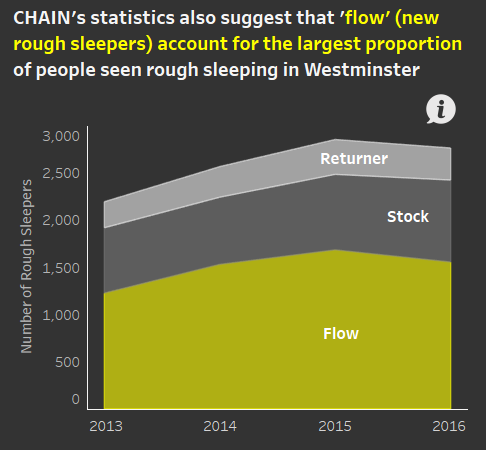 For the reasons that people face homelessness I did some background reading to support my visualisation. I found the Shelter website particularly helpful for this.

Interestingly the CHAIN report also included the reasons people gave as to why they were sleeping rough. The reasons given included;

In the 2016/17 CHAIN report, 2,826 new rough sleepers had information recorded about their last longer term or settled accommodation before sleeping rough. Of these, 52% reported that their last settled base was some form of long-term accommodation, including 36% coming from private rented accommodation. In fact, end of tenancy evictions from private landlords is the most common cause of homelessness in England.

I had initially built a chart to show the staggering rise of house prices across the country in the last 10 years and had wanted to include a section about home affordability (or the lack of affordable housing options). However, given that space on my visualisation was limited I decided to exclude this from the final version. Instead, I included icons I downloaded from NounProject with key facts about the reasons people find themselves sleeping rough:

The Government’s Approach to Tackling Homelessness

This topic could warrant a whole dashboard of it’s own. It’s a complex area with many opposing views. To keep things simple I made reference to the 2002 Homelessness Act and what local councils currently have a duty to do to address the problem. I know Papa has written extensively about this topic already and there are plenty of resources available on his website.

“England and Northern Ireland still use the Priority Needs test to determine who is or is not eligible for state support if they become homeless. According to this rule of our law (which Scotland and Wales did away with), the only groups in society are entitled to housing assistance are households with dependent children, with pregnant women, those who are mentally ill, ex-servicemen/servicewomen, 16 to 17 year old’s, 18 to 20 year old’s with condition of previously being in care homes, and ex-convicts. So that means you’re on your own if you’re falling into difficulty with housing and you’re: single, in a couple without children yet, not an ex-offender, not ex-military, not mentally ill. There’s a LOT of people who fit that bracket. And it’s not an immigration issue; the research actually shows the most common homeless character profile is a white British man”.

Papa currently has a petition on Change.org to “Close the Systematic Homelessness Pipeline in the UK”. You can read more about his campaign and sign the petition here.

At the time of writing the petition has 23,464 signatures, just short of the initial target of 25,000. The UK Parliament page covering petitions states that if a petition reaches 10,000 signatures from UK residents, it warrants a response from Parliament. However, at 100,000 signatures a petition will warrant a debate in Parliament on it’s subject matter.

Please take the time to sign the petition and share it with your network to help Papa reach the 100,000 target.

Usually on my #VizForSocialGood vizzes I’ll include a ‘call to action’ with a link to donate money to the charity or list ways in which you can help support the cause. However, the brief of this project wasn’t to source donations or to find volunteers. Instead, it was to raise awareness of homelessness in the UK only. With this in mind I concluded my viz with a brief paragraph about Papa and the Tomorrow Today project and included the website address so people can find out more and get involved, should they wish to do so.

Below is my completed viz. I trust it helps to broaden your understanding of the topic.

Click on the image to interact with the full version on Tableau Public.

Note: Homeless man photo © Garry Knight, licensed under CC BY 2.0 and adapted from the original.

2 thoughts on “Homelessness in the UK – Tomorrow Today #VizForSocialGood”