For #MakeoverMonday this week I wanted to try something new. For the last few weeks I have been playing it safe with line/bar charts and scatterplots so I decided I would challenge myself a bit more this week. This weeks’ data explored tourism spending in New Zealand since 2008, specifically using the Regional Tourism Indicator (RTI) index.

Eva Murray kindly shared some New Zealand TLA level geospatial data in addition to the main dataset which I thought I would use to build a map. I rarely work with map data in Tableau so thought I would use this as a good learning opportunity. However, this proved to be more of a challenge than I had expected! I tried to for a while to plot the polygon ID’s and point order but I kept ending up with something that looked like this:

I eventually figured it out after referencing this tutorial video from Tableau (hint: point order needs to go on path and polygon ID on detail). By this point I had built a nice filled map but spent so long trying to get it right I had forgotten why I was going to use the map in the first place and ended up scrapping the idea altogether!

I like the colours Neil chose (I later discovered that he used a London Underground colour palette which makes this even more fascinating) and I like the almost child-like appearance of the ‘squiggles’ on the tile map. It’s simple yet effective and any significant changes in tourism spending per season per region are still easy to identify.

After my half-hearted attempt at a polygon map I decided I would try to build a hex map instead. This is something I have never tried before so would prove to be a new challenge for me (which is what I intended). My idea was to show the regions where tourism spending had increased since 2008 in a different colour to those where spending had declined. After searching on Google for Tableau hex map tutorials I stumbled across this blog post from Matt Chambers. In his example Matt built a hex map of the USA. I knew mine would be more challenging since I was looking at New Zealand so I would need to prepare my own rows and columns data table. However, this didn’t put me off. If you aren’t familiar with tile or hex maps you need to tell Tableau where to plot each region/state on the worksheet; imagine a regular map where every grid square has a unique column and row reference.

At this stage I could have started manually working out where which region/territory should appear where on the page. However, I’m not familiar with New Zealand geography (at least I wasn’t before this week) and I didn’t have a map of New Zealand to hand. Then it occurred to me that Neil Richards must have applied similar principles to build his viz (I thought Neil may have found an easier way to do this but I later discovered he prepared the data manually with a map and grid side-by-side). I tweeted Neil on Monday morning to ask if he could kindly share his data with me. Unfortunately (for me) he was at work and couldn’t help until later that day. Since I wanted to complete my submission before the end of the day I decided to download a cross-tab of data from Neil’s workbook and manually add any missing data. The cross-tab downloaded in this format:

While the row and region data was present and didn’t require much manipulation, the column the data was split across the page by column. I therefore needed to pull the column reference data into a single column to make it useable in Tableau. I decided to do this manually (there may have been easier methods but I decided to stick with one that I knew would work). Eventually I ended up with a table that looked like this:

This was exactly what I wanted so continued to connect to the data and attempt a hex map using the instructions in Matt’s blog post. Unfortunately my hex map ended up looking like this: 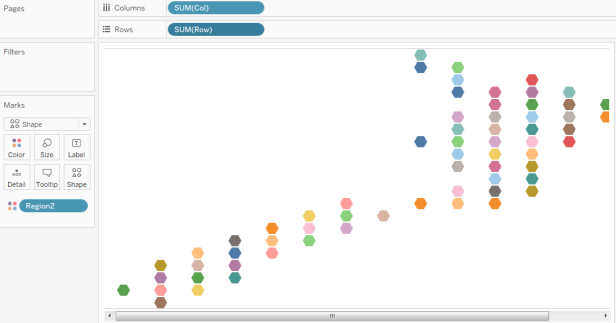 No matter how hard I tried I couldn’t get the spaces between the columns to reduce! Since I didn’t have much time I scrapped the hex map idea (I’ll try it again another day) and decided to build a tile map similar to Neil’s (now I had the column and row data I didn’t want to waste it!). Thankfully from here the tile map was relatively easy to build (with the help of this blog post, again from Matt Chambers) and I was really pleased with the result. I like the way that by showing increases in spending over time (and on the whole tourism spending is on the increase in New Zealand) each line chart looks like a wave which is quite fitting for somewhere like New Zealand!

I could have included a reference line for the baseline and displayed this on every tile but I felt that would spoil the overall look of the tiles. Instead I wrote a calculation to change the colour of the line depending on whether each year was above or below target:

Since I wasn’t showing any seasonality in my tile map (only year-on-year variance from the baseline) I decided to show the seasonal differences separately. A few people had done this already  (namely Andy Kriebel) so I took inspiration from them on the design of this section.

To complete the viz I added a filter to the tile map to switch between tourist type and a highlighter to highlight specific regions. There was a lot of guidance information provided by Eva about the RTI index which I didn’t want to include on the main viz but it was important to include this. I decided to include an information icon (one of my favourite tricks) and include this information in the tooltip to appear on hover. This would ensure the information was included without taking up much space. I also added a silver fern as a finishing touch!

Unfortunately after publishing my viz I realized I had made a mistake (and Neil Richards also highlighted this in his blog post here). On my original viz I forgot to exclude 2016. Since there were only a few months of 2016 included in the data set and not a complete year, including 2016 as an average variance from 2008 made 2016 look like a popular year for tourism spending. This was particularly true because the early months of the year are summer in New Zealand where tourism is more popular so spending is higher (notice on the original many of the regions saw an increase in spending in 2016). After adjusting my viz and removing the 2016 data it looks far more accurate:

You can interact with my updated viz on Tableau Public.

In summary I really enjoyed Makeover Monday this week. I tried something new (which was my original objective) and I’m happy with the final result. In his blog post Neil writes about collaboration and how we are noticing more examples each week of people working together and sharing ideas through the Makeover Monday project. Although I wouldn’t call this example true collaboration I certainly wouldn’t have ended up producing this viz without inspiration from him (and his data came in very useful).