This week 14,000 data enthusiasts descended upon Las Vegas for the annual Tableau conference. Before the conference becomes a distant memory I want to share my highlights of the week, what I think went well and what I think could be improved.

This is always a conference highlight for me since #MakeoverMonday is a project particularly close to my heart. I frequently engage with other #MakeoverMonday regulars on Twitter and the conference has a unique way of bringing us all together. This years’ session had 500 attendees with another 200 queuing outside; staggering considering only 100 people attended the live session in Austin! Thank you Andy & Eva for your dedication to this project all year round!

2. Rob Radburn’s – Vizzing with Joe: What An 8-Year Old Tells Us About Using Tableau

When Rob presented this session in London at Tableau Conference on Tour in the summer I was unable to attend due to work commitments. I was disappointed I missed it because the feedback from those who attended was fantastic. Imagine my delight when I learnt the session had been added to the conference agenda! I’m pleased to say it didn’t disappoint. This session had a perfect balance of emotion, theory & best practice. Rob is also a fantastic presenter and the video interviews with Joe himself were heartwarming. 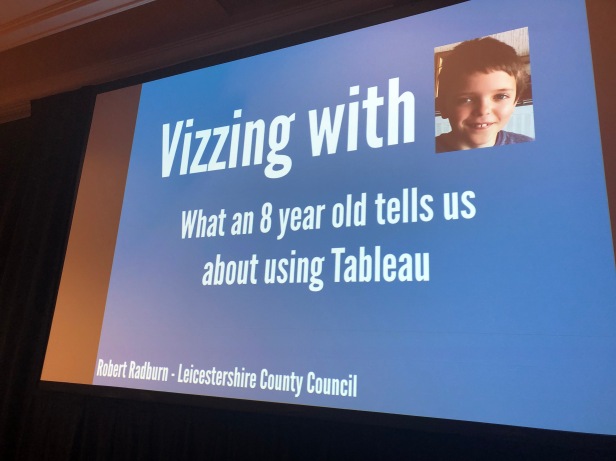 3. Paul Banoub’s – Our Tableau Centre of Excellence at UBS

Paul’s Tableau Centre of Excellence at UBS in London is world class. Three years ago (before I knew Paul) I attended a similar session he presented at the Tableau Conference on Tour in London and was instantly in awe of the CofE setup at UBS. In this presentation Paul discussed the approach his team takes to foster the internal Tableau user community including their approaches to recruitment, training and engagement. Many of those who attended were equally inspired by the UBS approach and Paul was inundated with questions at the end which is always a good sign that the audience were engaged.

Matt’s multi-slide presentations have become a conference favourite for many. Matt is fantastic at presenting complex information in a simple, humourous and easy to understand way. In this presentation he used Lego to explain use cases for simple but perhaps under-utilised Tableau functions such as FLOOR and CEILING, ZN and RANDOM. This was a great refresher session for me. Thanks Matt!

Paul Chapman presented this session to the #LondonTUG in September so I had already seen the preview. However, this was a great session where Paul offered real insight into how he got to where he is today in his career. This session was presented in one of the StoryPoint theatres in the Data Village, a new format for Tableau Conference. I think this format worked better than expected (in the case of Paul at least) and although many didn’t make it in time for a seat they could still watch and listen to Paul from the outside of the room.

My Tableau friends are like my second family (see more below) so it’s always a pleasure to catch up with everybody at conference. The conference also offers the perfect opportunity to make new connections and meet people I admire in the community. This year was no exception and I had the pleasure of meeting  so many new friends including Mark Bradburn, Chantilly, Josh Tapley, Shawn Levin, Tom o’Hara and the rest of the ComCast crew, Corey Jones, Michael Mixon, Phillip Riggs, Ken Ferlage, Mike, Bridget Cogley, Alicia Bembenek, Matt Chambers, Brian Graves, Pavani, Amar and Ann Jackson…just to name just a few!

Here are a selection of some of my favourite pictures from conference. 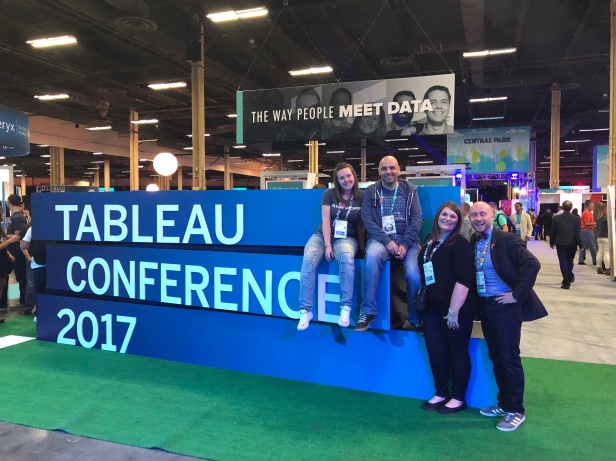 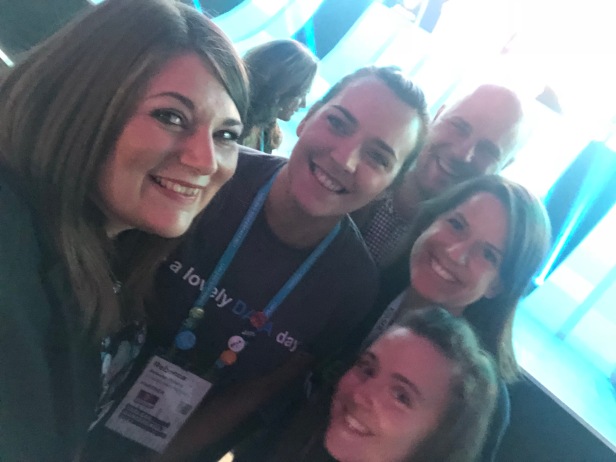 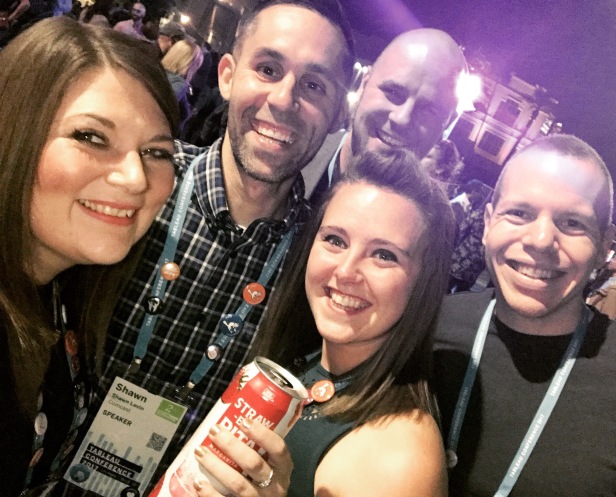 The Tableau community is of huge importance to me. Since attending last years’ conference in Austin I have remained in touch with all of the friends I made there. Unfortunately for me the community spans the world so it’s not feasible to see these friends on a regular basis. Instead, for 51 weeks of the year 90% of my interactions with my Tableau friends are online; whether that be through sharing vizzes, working together on collaboration projects, sharing learnings, giving encouragement, joining or presenting online webinars, reading / writing blog posts or participating in (sometimes heated) Twitter discussions. The annual conference is the only time in the year that I get to see many of these friends in person, all in one place, hence why it’s such a precious, unique and highly anticipated event for me and many others.

In the weeks leading up to the conference Tableau started the hashtag #WeAreDataPeople to celebrate the community. Tableau mailed #WeAreDataPeople flags to the US community with one simple directive: Take a selfie. Now you should know by now if you ask the community to do something they will deliver on it! Twitter was flooded before conference had even began with people taking selfies of themselves with the #WeAreDataPeople flags either alone, with friends / colleagues or even with their children. Living in the UK we didn’t receive the flags pre-conference but that didn’t stop us from getting involved and using the hashtag! As conference got underway people continued to use the hashtag and many of these photos were shown on the keynote screens during the week. 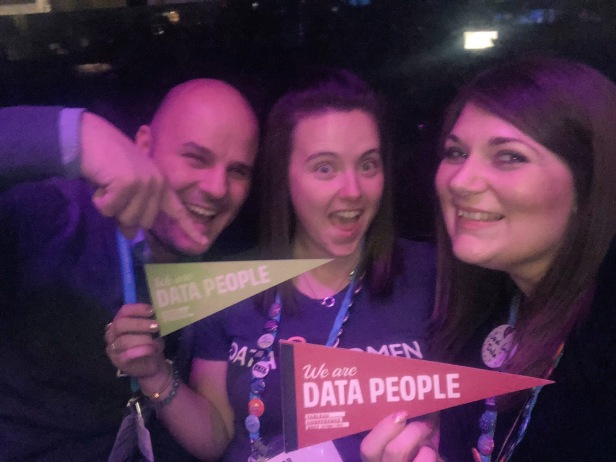 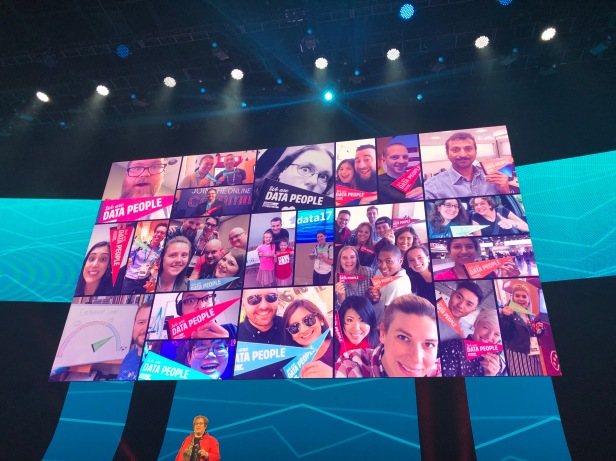 The #WeAreDataPeople hashtag became the slogan of the conference, so much so that Robert DeLong (Data Night Out performer) even wrote and performed a song about it at Data Night Out which you can find here. The ever-growing Tableau community felt even stronger & more welcoming at this years’ conference and perhaps the #WeAreDataPeople initiative helped to showcase how wonderful this community is.

When the tragic shooting at the Mandalay Bay happened a little over a week before conference I have to admit I thought the event might be cancelled. However, Tableau’s response was one of defiance. The stance from Tableau was to carry on as normally as possible to show our collective resilience and the force we can be for positive change.  Before the first keynote the Tableau executive team took to the stage to acknowledge the tragedy and show their respects by leading a minutes silence. They also started a fundraising campaign for the National Compassion Fund which by the end of conference had raised over $120,500.   There were also multiple initiatives run through the week to support victims and the local community. The strength of the Mandalay Bay staff was equally impressive. Thanks to everyone involved in the support effort. 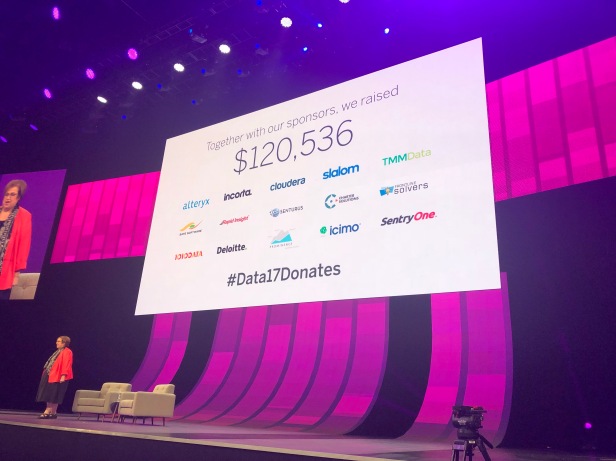 As a conference venue the Mandalay Bay was impressive. It was a welcome change from Austin to have everything under one roof again and while the layout was slightly confusing at first it was easier to navigate after day 1. The Data Village was a little overwhelming due to it’s size but it was good to have the Expo Hall and refreshment areas in the same space (unlike last year when there were two separate Expo Halls). The Data Night Out space was also very impressive, especially since this had been organised at such short notice. Kudos to all of those involved in the organisation of the event, especially considering the circumstances. 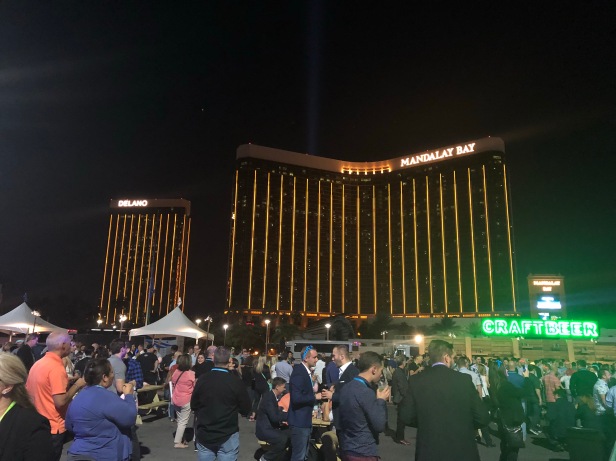 What would I have done differently?

Overall the conference was fantastic! There are very few things I can fault. If I had to offer feedback, these would be my observations.

Having been involved in the Tableau community for some time I’m familiar with the Zen Master programme. However many other people, especially newcomers won’t necessarily know what it is. Last year I enjoyed watching the Zen Masters being celebrated on stage before one of the keynotes. Being my first conference it was my first time seeing this event and I thought it was a fantastic way of introducing and showcasing the Zen Masters to conference attendees. It’s also a very proud moment for the Zen Masters themselves to take to the stage for this.

Unfortunately there was no ‘Zen’s on Stage’ event at conference this year. I feel the absence of this feature highlights a missed opportunity to broaden the reach & appreciation of the Zen Master program. I’m sure there are legitimate reasons why ‘Zen’s on Stage’ didn’t happen but for me it’s absence left a void in the conference schedule.

The Zen Garden in the Data Village was a nice addition and something I’ve not seen done before. While there were drop in sessions with Zen’s available in the Zen Area I feel these weren’t as well publicised as they could have been (I don’t believe these were advised anywhere but on the TV screen in the Zen area but I may be wrong on this). Given these sessions weren’t well publicised I don’t believe there were as utilised as much as they could have been.

Once the Conference app became available to download one of the first observations of mine was the session timing overlaps. For instance there were break out sessions running from 10:30 to 11:30 but other sessions in the StoryPoint Theatres were starting at 11:15. To attend both this would mean either leaving a session early (which isn’t ideal) to attend another or missing sessions altogether. I appreciate the timing of sessions is very difficult to coordinate but I feel it would have been a far better experience for attendees if sessions were split into time slots with the same start time. It’s a shame that the StoryPoint Theatre sessions weren’t recorded either as I missed more of these types of sessions than the break-out ones.