It’s hard to believe that nearly two weeks have passed since Tableau Conference on Tour in London (TCOT for short). For those not familiar with TCOT, especially those from overseas, it is similar in format to the annual Tableau Conference in the US on a much smaller, more intimate scale. The conference took place at Tobacco Dock (the same venue as last year) from 5th to 7th June and had over 1,000 Tableau enthusiasts in attendance.

I had been looking forward to this event for a while and it certainly didn’t disappoint. I thoroughly enjoyed the sessions I attended and as always the conference was a fantastic opportunity catch up with old friends as well as meet new people in the community.

Here are my highlights (in no particular order):

I always look forward to the live #MakeoverMonday sessions at conference. There is a real buzz about doing #MakeoverMonday in a room filled with others undertaking the challenge at the same time and the fact the one hour time limit is enforced adds an extra challenge, especially for those that like to spend more time on their vizzes.

This year the live session took place on Monday in a room named the ‘Box & Whisker’ bistro which was also home to the Viz Art Gallery (more on that later). This was quite an intimate setting with lots of small bistro-style tables and chairs which people gathered around for the event. It was great to see some regular #MakeoverMonday participants in attendance including Dan Harrison, Charlie Hutcheson, Pablo Gomez, Neil Richards and David Krupp (all the way from the USA)! This was the first session of the conference and took place before conference had truly started (Monday is mainly reserved for people attending training courses or sitting exams). With this in mind there was a feeling of excitement and anticipation in the room about the few days ahead. Hosted by Andy Kriebel and Eva Murray they gave an introduction to #MakeoverMonday before everybody got vizzing.

The data set was looking at the popularity of US National Parks in terms of visitor numbers. Unfortunately this week I made the mistake of challenging myself to try something new (unit charts) in the live session. There is nothing wrong with trying something new (I try to do this as much as possible through #MakeoverMonday) but this perhaps wasn’t the best thing to do in the live session. I encountered some problems with my viz which slowed me down and when the time was up I wasn’t thrilled with the end result. However, I published my viz to Tableau Public regardless as this is an honest account of what I produced in the hour. Going back and amending it later would almost feel like cheating so I decided to leave it as it was and move on. Here is a link to my viz on Tableau Public.

Below is a fun picture of some of those that took part in #MakeoverMonday at conference:

The first full day of conference kicked off with a keynote from James Eiloart, Tableau’s Senior Vice President of EMEA Sales. James took us back 1879 and told the story of George W. De Long’s ill-fated voyage to the Arctic and the challenges he faced when exploring uncharted territories.

James introduced Jeff Bernson from PATH who are responsible for the ‘Visualize No Malaria‘ project with the support of the Tableau Foundation, Tableau partners including Alteryx For Good and Exasol and volunteers in the community. Jeff gave a powerful presentation which described the work that PATH are doing to fight the spread of malaria in Zambia and explained how Tableau is helping to support them on their mission.

Anyone can dedicate their time / Tableau skills to support the project and I would urge you to take part if you can.

Ryan Sleeper is an independent data visualization designer, author, speaker, trainer, and consultant specialising in Tableau. He is also a Zen Master and 2013 Tableau Iron Viz champion. As a fan of Ryan Sleeper’s blog I was particularly looking forward to his presentation.

Ryan gave an insightful presentation of his approach to data viz using the ‘Triple Crown Framework’; Data, Design and Psychology. He showed a selection of slides which demonstrated how a table of data could be easily transformed into a visualisation for faster insights. He also demonstrated live how to build a dumbbell chart in Tableau which inspired a recent viz of mine.

Ryan has a new book coming out in July called ‘Practical Tableau‘ which includes 100 Tips, Tutorials and Strategies for Tableau and data visualisations. This is definitely one to look out for!

Here are a few photos from his session:

Andrew Beers is Chief Development Officer at Tableau. His keynote gave an overview of the Tableau strategy, roadmap and vision. Andrew highlighted some key features released in Tableau 10.3 and gave us a flavour of things to expect in version 10.4 and beyond. It’s always exciting to see new features demonstrated live; Andrew gave a few demos which featured the new line styles (regular, jump or step lines), the tooltip selector for interactivity and even distribution on containers.

I attended a similar presentation by Andy at #data16 in Austin but he assured me this would be different and he wasn’t wrong. Andy discussed visual design and the three levels of processing (Visceral, Behavioral and Reflective), relating these to dashboard design.

Andy presented some of the eye-tracking research Tableau are undertaking to understand which areas or elements on a dashboard users tend to focus on first. I find this particularly interesting and looking forward to hearing the findings of their research. He also provided some excellent dashboard design tips and demonstrated many examples of ‘good’ dashboards from the community.

On Tuesday the leaders of the London User Group (amongst others) were invited to attend a short roundtable discussion with Tableau co-founder and Academy Award Winner, Dr. Pat Hanrahan (unfortunately this meant I had to miss Neil Richards talk – sorry Neil).

Pat was keen to meet some customers and learn what they had been doing with Tableau. To attend this meeting was an honour to say the least and I think we were all a bit starstruck!

The meeting was great. There was a diverse mix of customers in the room and it was interesting to hear what others are doing with Tableau and their individual challenges.

Pat even let us have our photo taken with him: 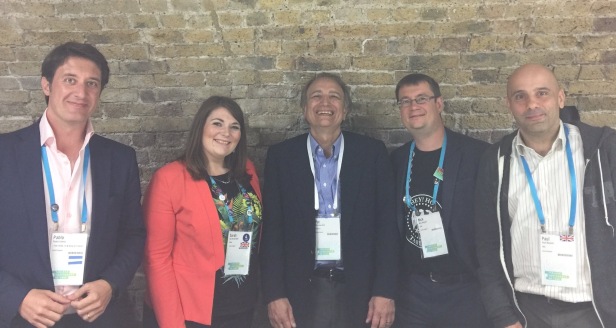 Sir David Spiegelhalter is a British statistician, Winton Professor of the Public Understanding of Risk in the Statistical Laboratory at the University of Cambridge and a fellow of Churchill College, Cambridge.

David’s keynote began with some particularly entertaining examples of ‘bad’ charts like this one from Fox News:

David explained the tactics that the media use to exaggerate or overemphasise numbers in news releases; particularly those relating to health concerns or medical breakthroughs.  For example, he explained how numbers from the same news story or medical research can be framed in a positive way (i.e. 10% of people have a genetic variant which reduces their risk of high blood pressure) vs. a negative one (9 in 10 people carry gene which increases their chance of high blood pressure) by the media.

He talked about trust in data and things we should look for to determine if data is genuine. He also recommended the Ted Talk by Onora O’Neill on the subject.

David’s keynote was particularly entertaining and there was plenty of laughter throughout!

There was a feeder contest a few months ago which found the three finalists for the completion; Jonathan Trajkovic, Athan Mavrantonis and (London TUG’s very own) David Pires. The contestants received the IronViz dataset (on UK weather) a few days before the conference so had been working hard on practicing their visualisations in the days and hours leading up to the competition. They had to create their visualisations live on stage to an audience of over 1000 people, including the three judges Andy Cotgreave, Eva Murray and Andrew Beers in just 20 minutes (no pressure). The completion was hosted by Louis Archer and Sophie Sparks from Tableau who did an absolutely fantastic job of keeping the crowd entertained and engaged throughout the competition.

Once the 20 minutes were up each viz was scored by the judges on visual design, story-telling, analysis and visual best practice. The audience were also able to vote for their favourite viz on Twitter.

It was impressive to see what the contestants built in such a short space of time and also to watch their design processes. They all did an awesome job but there could only be one winner and that winner was David Pires! Well done David!

There was a nice surprise in the form of a Viz Art Gallery at TCOT this year. Various notable Tableau Public vizzes from the likes of Matt Francis, Pooja Gandhi, Mike Cisneros, and Neil Richards (amongst others) were showcased on the walls of the Box & Whisper bistro in true art gallery style (including artist bios). They even provided each viz in postcard form and a post box that you could use to send your completed postcards.

Here are a selection of the featured vizzes:

Conference wouldn’t be conference without a few parties and get-togethers. Tableau provided a fantastic welcome reception on Monday night followed by the Data Night Out on Tuesday.

TCOT is so much smaller in scale than the US conference that it presents many more networking opportunities. The layout of the venue also helps to encourage this with plenty of break out areas like the Data Playground run by the Information Lab, the German-style pub run by Exasol or simply the picnic benches outside.

It was great to catch up with friends from the community throughout the conference and also meet some new people I was familiar with from #MakeoverMonday but had never met in person before, namely David Krupp, Louise Shorten and Athan Mavrantonis. 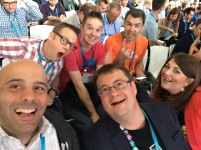 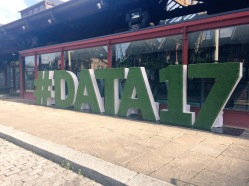 Matt Francis and Emily Kund recorded the Tableau Wannabe Podcast live from the conference and conducted interviews with various people from the community across the three days.

I have particularly enjoyed catching up with the podcasts since the conference. Matt and Emily conducted some awesome interviews which I suggest you listen to if you haven’t already. There are interviews with:

All of the episodes can be found here. 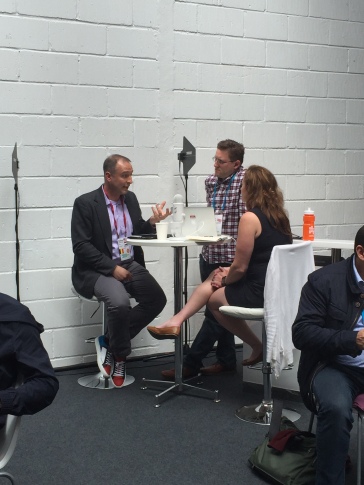 I always enjoy TCOT with this year being no exception. I left the conference feeling inspired with lots of design ideas and tips to incorporate into my work. I made a conscious effort to attend more customer sessions this time and I think it paid off (I prefer to watch the Tableau learning sessions after conference and follow these at my own pace). Although I missed some sessions I wanted to attend I’ll hopefully be able to catch these online later, assuming they were recorded.

I guess it’s true what they say….time flies when you’re having fun! The conference seemed to be over before I knew it! I’m already looking forward to next year.